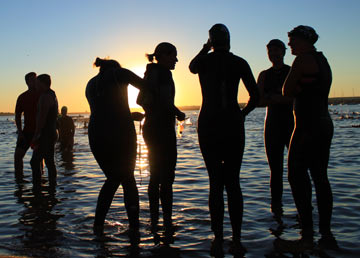 Whether you've signed up for your first triathlon or have done a few and are now hooked on them, a triathlon wetsuit is a smart investment!

The Right Wetsuit Matters
There are many types of water sports wetsuits available and you might think they're all the same. But a triathlon wetsuit is very different from one made for scuba diving, jet-skiing or other sports.

While all of these wetsuits will offer some degree of insulation, that's where the similarities end. Water sports wetsuits are typically covered in abrasion-resistant Lycra and aren't necessarily designed for any particular body position.

Triathlon wetsuits, on the other hand, sport slippery outer coatings that make you glide faster through the water. Plus, they're made specifically for swimming so you're more comfortable with your arms over your head and looking forward. And since you'll be reaching over your head many times in an open water swim, you'll really appreciate the difference!

There are different styles of triathlon wetsuits for different types of swimmers. Some suits have extra buoyancy in the hips and legs so runners and cyclists with heavier legs can stay high in the water. However, efficient swimmers with a strong kick may find that these types of suits interfere with their stroke. Knowing what kind of swimmer you are is a big help when shopping for a wetsuit. 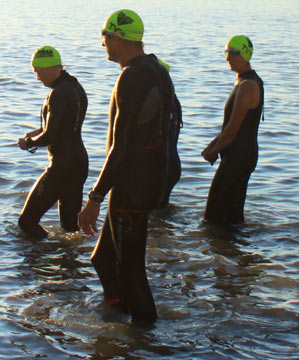 Full-Sleeve or Sleeveless
Triathlon wetsuits come in two basic styles: full-sleeve and sleeveless. While a full-sleeve wetsuit offers a little more warmth, more buoyancy and less drag than a sleeveless one, some people find a sleeveless suit more comfortable.

For best results, a triathlon wetsuit should fit like a second skin. If you aren't accustomed to tight clothing, this might seem restrictive at first, but a wetsuit will loosen up a bit when you get in the water.

Sleeveless wetsuits often feel more comfortable in the chest and shoulders to people who don't like the feel of tight clothing. They can also be good for swimming in warmer water, especially for people who generate a lot of heat when they swim.

Full-sleeve wetsuits can take some getting used to, but they have a lot of benefits. Many full-sleeve wetsuits have some type of catch panel on the forearm to help you grab more water with every stroke. And since they cover more of your skin, they are more buoyant and hydrodynamic than sleeveless suits. 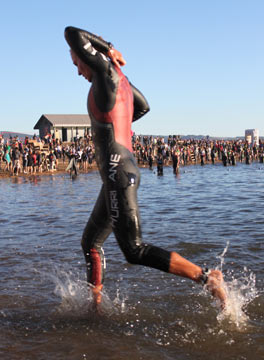 Fit Comes First
Triathlon wetsuits come in all different shapes, just like people. While the neoprene used in triathlon wetsuits is very stretchy, not every wetsuit will fit every body type.

Since they need to fit like a second skin, it's a good idea to try on wetsuits before you buy one. Keep in mind that it will be a little looser in the water!

A properly fitting wetsuit will give you a snug hug without restricting your stroke in the water. The fit of the torso is very important when trying on a wetsuit. Too big in the chest and neck and water will flow into the suit and drag you down. Too small in the chest and neck and you will feel restricted and uncomfortable. If the torso is too short, it will feel like your shoulders are being pulled down. Be sure to take some swim strokes after you've got the wetsuit on to see how it feels.

The fit of the arms and legs isn't quite as important as the chest and shoulders. The legs and sleeves need to be snug enough to keep the water out but not so snug that your arms and legs start to tingle after awhile.

If you are long-limbed, you may find that your wrists and calves stick out from the suit, but this doesn't mean you need a larger size. Some wetsuits are even cut high up on the calf to make removing them in transition a little easier.

Wetsuit Technology
They may not make you look like Batman, but triathlon wetsuits can have just as much technology in them! Most triathlon wetsuits are made from Yamamoto neoprene rubber, often considered the gold standard of wetsuit neoprene because it's lighter, stretchier and more buoyant than other neoprenes.

Triathlon wetsuits are commonly made from Yamamoto #38, 39 and 40 neoprenes. The higher the number, the more flexible and slicker the neoprene. Wetsuit manufacturers will often use different types of neoprene throughout a wetsuit to balance flexibility, durability and price.

Neoprene itself is made from several layers of different materials. The inner layer, a jersey-type material, supports a layer of blown rubber that has a special outer coating to reduce drag in the water. Some neoprenes incorporate large air pockets for increased buoyancy and others even have a super-thin layer of metal for added warmth.

Triathlon wetsuits are often comprised of varying thicknesses of neoprene to optimize the fit and function of the wetsuit. Thinner neoprene has more stretch to it while thicker neoprene is warmer and more buoyant.

Sleeves, for instance, may be made from 2mm-thick neoprene for greater stretch while the torso and legs of the same suit may use 5mm neoprene for more buoyancy and insulation.

Triathlon wetsuits also incorporate different technologies for speed and comfort. The neck needs to seal out water without feeling uncomfortable or restrictive and there are many different styles to achieve this.

Many wetsuits also have specially designed panels on the lower legs for speedy removal in transition. On full-sleeve wetsuits, there are often different types of panels on the forearm designed to enhance the catch part of your stroke. And the rear zipper is engineered to seal out water and be easy to remove in transition.

Swimskins
Not all events allow wetsuits, especially when the water temps are warm. That's why many wetsuit manufacturers also make swimskins. A swimskin is a Lycra suit with a slick outer coating that reduces drag in the water. They don't have the center layer of blown rubber like a wetsuit and don't provide any buoyancy or insulation.

Swimskins are fast in the water but they don't breathe well on land and are intended to be removed after the swim, just like a wetsuit. Be sure to check the rules of your event to see whether wetsuits or swimskins are allowed.

Ready to Swim
Stop by and let us help you find the wetsuit that's right for you! Be sure to bring your swim suit or triathlon kit to try on wetsuits.